I’m doing a lunchtime talk at none other than the illustrious Hatchards bookshop in Piccadilly on September 10th, and will be discussing all aspects of Rochester then. It should make for an illuminating hour or so – details can be found here.

Chelsea, Woodstock and Oxford residents – I will be coming to a bookshop near you soon too as well. Details to come shortly!

I’ve done another interview with the excellent Workshy Fop blog about all things John Wilmot, in which I’ve briefly addressed some of the comments made about Rochester in the reviews so far – I’m going to return to this later but in the meantime here you go.

I’m going to be on BBC Radio Oxford next Tuesday at around 11am discussing all things Rochester and Blazing Star. No swearing or smut, but if you don’t mind that, you can listen to it athttp://www.bbc.co.uk/radiooxford or on 95.2 FM if you’re anywhere near Oxford itself…

Somewhat to my faint surprise, the reviews continue to come in. There’s a lovely piece in today’s Daily Mail which describes the book as ‘the most comprehensive portrait of Rochester yet’. They’ve also made it their book of the week. I was also thrilled to see the book covered by the great Denis Donoghue in a recent Irish Times review.

There will be some more talks and signings soon – details to follow – and I’m also appearing on BBC Radio Oxford next week, and will be sure to have a few things to say about Rochester.

Thrilled that I’m doing my first talk on Blazing Star this Wednesday (9th July) at the excellent Society Club in Soho – scene of last week’s epic launch – at 7pm. Tickets are free from Babette@thesocietyclub.com and I’m going to be talking about Rochester, his life and legacy, and then answering questions afterwards. It promises to be a hugely entertaining night.

I’ve also done an interview with them and it can be found here.

Delighted to see that there’s been a good amount of interest in the book since its publication. We had a barnstorming launch at the excellent Society Club in Soho on July 1st –  it was a great night, with a packed house that included everyone from architects and writers to restaurateurs and filmmakers. I hope that this picture gives a very small flavour of it… 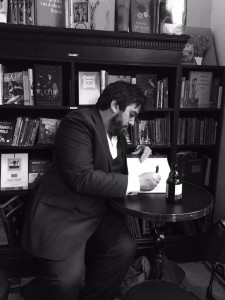 Anyway there have been several more reviews, which have been generally very kind. There have been a couple in the Times and Sunday Times (both paywalled alas), and a nice piece in The Book Bag as well. Hopefully there will be more to come soon!

I did a blog for my publisher Head of Zeus about what it’s like to research and write a biography of this type.

And I’ve also done another interview with The Resident magazine, which was great fun.

Plenty more to come, but a few noteworthy things:

- An interview with Corner magazine about Rochester, my influences and those I’m reading (and not reading) at the moment

- And a lovely early review in the Daily Express.

Although it isn’t officially released until July 3rd, there are a few advance copies of Blazing Star available in bookshops near you, just to whet your appetite. The excellent Society Club in Soho has some exclusively signed by me – and keep an eye on this space as regards an exciting event that I’m going to be doing with them next month!

Apologies, anyone who still reads this, for the lack of updates this year. As hinted at in a previous post, I’ve been hard at working writing a biography of John Wilmot, 2nd Earl Of Rochester, for Head of Zeus books. I finished the book earlier this year but edits and introductions and what-have-you have taken their time. However, we now have a book that I’m extremely pleased with in every regard; it’s been a pleasure to write it, and I hope that it’s rather different both to earlier biographies of Rochester and some of the fustier works about Great Writers that throng the shelves. It’s due to be published in July 2014, and I look forward to keeping you updated about any activity taking place around its appearance.

I’m currently writing the follow-up, 1666, which is a shorter work that HofZ are going to be bringing out in 2015 as part of a series of ‘Year In England’ books, so if you wanted to find out what the cures for syphilis were, which jail was known as ‘Hell’ on account of its squalor or what Charles II’s favourite food was, all shall be revealed.

I shall see you all next year, with many surprises in store. Until then, one more Rochester anecdote:

Charles was, by and large, open-minded when it came to personal comments made about him. He regarded it as sport, one that he was as complicit in as his favourites, and he took pride in coming back with a well-timed riposte. One night, at dinner, Rochester was asked to provide an extempore poem about Charles, and he replied, perhaps after a glass of wine, with the following:

‘God bless our good and gracious King,
Whose promise none relies on;
Who never said a foolish thing,
Nor ever did a wise one.’

Charles, taking the sally in good spirit, answered ‘That’s true; for my words are mine, while my actions are those of my ministers.’