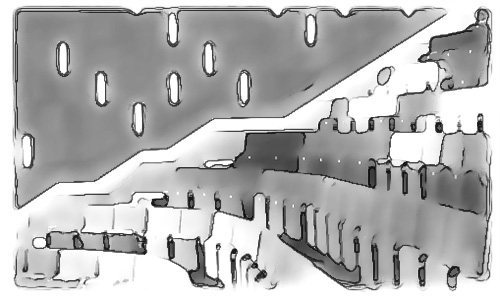 Heading to London’s newest theatre, the St James, in the pouring rain on a grim early February day is something of an endurance test, not helped by a tube strike which has paralysed the city. Victoria currently resembles a building site, and virtually every single street is either blocked off, semi-demolished or has a forbidding aspect to it. Therefore, it’s something of a relief to turn into Palace Street and find myself in the regal surroundings of the St James, where the smiling staff of the box office represent a welcoming vision of tranquillity in the depressing bleakness of the day.

The theatre, which first opened its doors in late 2012, has attracted plaudits for a distinctive and eye-catching programme, including staging Ingmar Bergman’s Scenes From A Marriage and, most recently, Sondheim’s revue Putting It Together on its main stage (as the press officer proudly informs me, ‘300 seats and a great view from all of them’), and a variety of offbeat and interesting work in its rather cool studio theatre, including everything from jazz and cabaret to one-man (and one woman) shows. It’s an eclectic and exciting place to see a variety of shows, but it’s also a friendly place to pop into for a cup of tea and sandwich, or an evening glass of wine. Unlike most comparable places, it’s open from noon until 11pm, and there’s likely to be something going on most of that time.

It’s also blessed with an excellent restaurant, Carrara, where I meet the charming duo of Director of Development Lady Lucy French and Associate Artistic Director James Albrecht for lunch. Dynamic without being overbearing, they represent the best of what the world of theatre has to offer, and prove a splendidly entertaining pair of guides to the world of St James. Lucy – who refuses a glass of wine on the excellent grounds that ‘I have a meeting with the Permanent Secretary of the Department of Culture this afternoon’ – is clearly passionate about all things Victoria and St James, but all too aware that, in an economic climate that isn’t as favourable towards the arts as many involved in would like, getting audiences in can be something of an uphill struggle. As she says, ‘While we’re delighted about the way that it’s all gone since we opened, it’s always a challenge to launch a brand new theatre in the midst of the recession, and it took a year to establish ourselves. Now, we’re having a fantastic time – two completely sold out shows this year already – and our reputation in both the studio and the main house is growing.’ This comes in no small part because of an eclectic programming policy that includes the Broadway smash hit Urinetown (‘getting in some of our more conservative audiences with that title might be a struggle’, James wryly notes) and the return of the great Max Stafford-Clark to direct a new NHS satire, This May Hurt A Bit.

It’s important for both Lucy and James that the theatre appeals both to the local community and wider afield – it’s a source of mild surprise to them that the third most popular postcode that their visitors hail from is ‘leafy NW3’. Nonetheless, they’re both aware that SW1 isn’t an area oversupplied with things to do of an evening – ‘the Royal Court being an obvious exception’, as James interjects – and that it isn’t enough just to provide somewhere to pop into, but to be a destination in its own right. James points out that, while both reviews and visitor numbers have been encouraging, ‘we’re not in a position to relax – it’s still early days and, while we get a feeling that there’s a buzz about the place, we have to keep ourselves from being complacent.’ One area that attracts a raised eyebrow is that of star casting; the theatre has been attracting excellent ensemble casts of superb actors but none of the A-listers, to date, who regularly appear at the Donmar and Almeida. As James says, ‘We never felt that we had to populate our plays with recognisable names and faces from TV and film, rather than we wanted the best actors for a part. However, getting the volume of people in that a new theatre needs does seem to require well-known people…’ He looks almost apologetic at this, and Lucy interjects ‘I think it’s important to strike a balance; we’re a serious theatre, and we want to balance high quality work with commercial success, which has been a chance to bring plays that might not suit a West End slot.’ Nonetheless, the appearances of the likes of Julian Clary and heartthrob Hadley Fraser at the studio seem a happy marriage of artistic integrity and A-list glitz.

It’s a pleasure to discuss the past, present and future of the theatre with two such obviously committed lovers of drama, and I’m particularly pleased that James wants to stage ‘a big, hilarious comedy’ in the main theatre in the near future, which he hopes will be their answer to One Man, Two Guvnors. As we finish our lunch, Lucy looks at me as we’re saying our goodbyes, and says, mock-imploringly, ‘You will come back and see us again soon, won’t you?’ My ticket to Urinetown is already booked.

To find out more about the St James Theatre, visit http://www.stjamestheatre.co.uk.