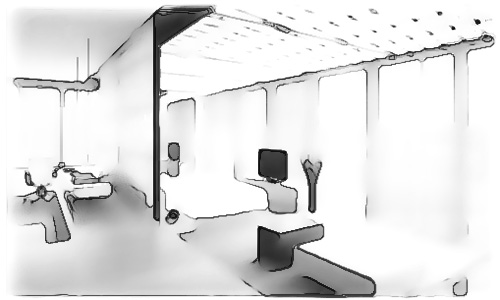 I arrive in Beijing early evening after a flight on the appropriately named Dragonair, which gets me from A to B without much in the way of unnecessary fuss or comfort. Beijing airport is a near-clone of Hong Kong’s – perhaps unsurprising, given that both were designed by Foster and Partners, amongst others. The first impression is that of luxurious opulence, but in a more watchful, contained manner than before. People stand around watching arrivals, and the queues are long. An unsmiling man taps away at a computer for what seems like an eternity, and it’s only when I’ve resigned myself to ‘re-education’ somewhere that all is apparently well and I’m allowed through to head to The Opposite House.

Like its Cantonese sibling, the Opposite House is an extremely slick and successful operation. It has a more opulent and grandiose feel to it, thanks to a courtyard-like design in the centre where the rooms all lead off, and also because of its multiple restaurants and bars. The accommodation itself is as comfortable as before, but with a slight twist; the white-hued walls and austere light wood make the place feel like the most luxurious monastery known to man, a feeling enhanced by the slightly off-kilter modern art that adorns the public spaces. (Again, it was designed by Andre Fu; my feeling is that he was given freer rein here.)

The first place that I sample dinner at is the Sureño restaurant, a Mediterranean spot lurking snugly in the basement. Conceived on a grand scale, it serves exemplary tapas on a scale that would impress the most hardened of Catalonians. Dishes including focaccia y jamon, oysters, mussels, excellent anchovies (and I loathe anchovies) and more come, one after another, and I’m powerless to stop adding them to my plate. The embarrassment is only slightly ameliorated by two factors; firstly, it’s my birthday and I feel some self-indulgence is vaguely in order, and secondly, a Wagyu rib-eye steak that comes as a main course puts a halt to any more gluttony. As I stagger up to bed, replete and more than satisfied, the vague thought crosses my mind that the local dishes I try had better live up to the foreign ones.

I soon find out, thanks to a cookery class I undertake at the Hutong cookery school nearby. I am not, nor have never been, one of those fortunate coves who is handy in the kitchen, but I embarrass myself in even more comic ways by failing to get to grips with the meat cleaver-esque knife with which I’ve been tasked to chop up cabbage. Once the mocking laughter dies down and my talents have been transferred to something more suitable (mixing), I can watch with wry interest at the way in which dishes such as cold noodles with soy bean paste and (a curiosity, this) stir fried fermented tofu with lamb are created, as if by alchemy. The eventual lunch is delicious, although I skulk in a corner as I eat it, vaguely ashamed of my utter incompetence.

A swift tour of the streets of Beijing follows, and I begin to get an impression of the place. While there are certain fleeting similarities with Hong Kong that extend beyond the airport, there are also substantial differences. There, a freely Westernized attitude holds sway that allows a certain sense of familiarity to set in immediately. Here, the lasting influence of the successful 2008 Olympics has been to set the city up as a world-class place for tourism and culture, but also the sense of otherness remains. Communism may be long dead, but Chairman Mao’s face still adorns banknotes. The days where tourists are required by law to stay in certain approved hotels are gone, but obtaining a visa remains a Byzantine process. It is fair to say that Beijing is not a place for anyone wanting an easy time, but the rewards – cultural and culinary alike – are considerable.

Ah yes, the food…we were going to mention that, weren’t we? Dining out here is a big deal. Restaurants start to fill up at ludicrously early hours, and queues persist for ages afterwards. For traditional fare at somewhere like the Najiaxiaoguan restaurant, expect excellent food along with a few oddities (but the more adventurously you order, the greater the rewards will be) at prices that are very low by Western standards. A modern alternative is the superlative Yunnan establishment Middle 8, which offers a more conventionally comfortable experience, albeit with the same, shall we say, ‘casual’ level of service. (Bowing and scraping certainly aren’t the done things here.) There are touches of quirkiness everywhere you look, whether it’s Najiaxiaoguan’s birdcages or the candied worms that are served up at Middle 8 as an amuse-bouche. I managed two.

A visit here wouldn’t be complete without heading to the Forbidden City. It’s simultaneously hugely impressive and rather repetitive, offering vast scale and a sense of hundreds of years of history in awe-inspiring fashion, and yet without any real sense of how the residents of this mighty palace lived and died. Perhaps one day this will be rectified, but in lieu of displays or explanations there’s always the kitsch appeal of wandering round and looking at the Forbidden gift shop, selling anything from Forbidden burgers and popcorn to Forbidden dolls. A brisk walk round Tiananmen Square afterwards was similarly impressive and daunting; the enormous portrait of Chairman Mao adorning the outside of the Forbidden City reinforced the idea, had we needed to remember, that this is still a country in a state of flux.

Before too long, it’s time to head home, but there’s one final treat left to come, in the shape of dinner at the Opposite House’s new restaurant, Jing Yaa Tang. Designed in association with Alan Yau (who is to open a version of it in London imminently), it’s got the sleek, classy feel of his establishments such as Hakkasan and HKK, but with a particular ace up its sleeve in the form of its roast Peking duck, which is miles ahead of virtually every other form of this animal I’ve ever tasted, and served with smiling panache by the staff. As I munch on the bird, reflecting that it probably had a short but happy life, I reflect that in an odd way it’s the national symbol of the city; it might look somewhat unappetizing on the outside, but it offers a smorgasbord of delicious flavours and unexpected delights that mean that experiencing it is an absolute pleasure.

Stay at The Opposite House from RMB 2,300 per night in a Studio 45 room, excluding 15% service charge. Add a breakfast package at Village Café for RMB 180. www.theoppositehouse.com